The Cicero Prep flag football A team moved to 5-0 on the season by thoroughly dominating Chandler Prep, 22-6.

Cicero’s defense dominated Chandler Prep all game, led by amazing play from the defensive line of Bronjour Byaruhanga, Loudin Ruiz and Luke Hodgson, who gave Chandler no time to allow plays to develop.  Micah Gadoury and Ty Erickson also provided great pressure for the defensive line of Cicero.  The secondary, led by cornerbacks William Twardeck, Crash Tonn and Jackson Potter, along with linebacker Van Mueller and safety Drew Kircos, allowed only a few passes to be completed all game.  To cap off the defensive dominance, Cicero secured 2 safeties against Chandler!

On offense, Cicero moved the ball with ease.  Running back Bronjour Byaruhanga led the way for Cicero, scoring 2 rushing touchdowns on beautifully executed long rushes.  Bron’s spectacular runs wouldn’t have been possible without the amazing blocking by the offensive line of Drew Kircos, Gio Lini and Luke Hodgson.  Loudin Ruiz made his first career start at quarterback and shined throughout the game.  For Cicero’s other score, Loudin connected with William Twardeck on a 60 yard touchdown pass that was deflected by Chandler’s cornerback, but hauled in by William!

The Cicero Prep flag football B team got back to its winning ways, securing a 7-0 victory over Chandler Prep.  The score was closer than the game itself, as Cicero played very well on both sides of the ball.  Cicero’s offense, led by quarterback Noah Lasiloo and running back Connor MacDonald, moved the ball effectively behind the offensive line of Martin Perez, Dane Stevens and Matthew Getzoff.  Quarterback Noah scored on a nice run to get on the scoreboard and Cicero never let up from there.

Game 2 vs Lincoln Prep (A team only)

Offensively, Cicero dominated on every possession.  Once again, running back Bronjour Byaruhanga led the way for Cicero, scoring 2 rushing touchdowns, including an amazing 70 yard run.  Jackson Potter caught a touchdown pass from quarterback Loudin Ruiz, as well as several key passes throughout the game.  Wide receivers William Twardeck, Van Mueller and Crash Tonn all caught passes during this impressive offensive onslaught.  None of it would have been possible without the amazing play of quarterback Loudin Ruiz and the offensive line of Drew Kircos, Luke Hodgson and Gio Lini.

On defense, Cicero was merciless, constantly pressuring Lincoln’s quarterback into making rushed throws.  Cornerback William Twardeck picked off 2 of Lincoln’s passes and made nice returns after the interceptions.  Drew Kircos was key to both interceptions as he helped in double coverage on both passes. Cicero’s defensive line of Bronjour Byaruhanga, Loudin Ruiz, Luke Hodgson and Tripp Cochran applied constant pressure to Lincoln’s quarterback.  By the end of the game, Lincoln was employing an offensive line with 6 players, a true testament to the dominating performance by Cicero’s defensive line.  Crash Tonn and Jackson Potter, along with linebacker Van Mueller played beautifully in the secondary as well. 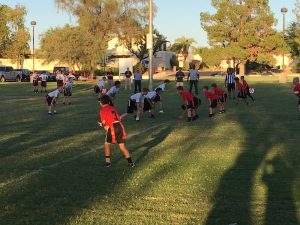 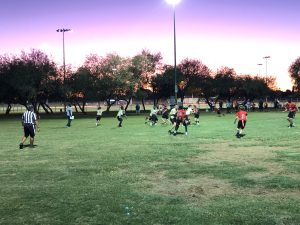