A great start by the Cicero MS Tennis team was dominated by the boy’s singles, who also took 1 out of 2 doubles matches.

Andre Galowicz, #2 player, had a solid start and dominated his opponent with his serve and forehand winning 6-2.

Lucas Galowicz, #3 player, was more consistent and stronger than his opponent taking the match  6-0.

Lastly, Drew Collins and Mathew Thorley played together in doubles for the first time. Drew and Mathew played well but their opponents were more consistent.

Madison Lofstedt was representing the girl’s middle school team for the first time. Madison played well, but she competed vs an opponent with a stronger topspin on both sides and fell in her match. 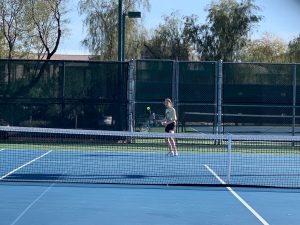